the Kante algorithm is probably a little creaky, a little stiff etc. etc. but once it stretched out, it seems not to be worse for wear.

for those who aren't familiar, and asking "wtf is this?!?!?", we used to post game predicts every week for several age groups, mostly on the boy’s side. the goal was to apply some objective criteria to help families measure progress not by wins and losses but by how did their kids do relative to historical expectations.

if team A is playing team B, and team A is good and team B is not, winning is kind of meaningless. team A is expected to win.

instead, the algorithm predicts, based on historical data, that team A will score for example, four goals and that team B will be held scoreless.

if team B then either scores a goal or holds team A to three goals, that then is progress for team B relative to how team B has done in the past, and progress is good.
________

some caveats. the algorithm usually takes about ten games before it’s as accurate as it will get. So far, we have about six games for most ECNL 05/04 teams. You can do the math.

so, the algo is not perfect (alas, since EPL allows betting…) and can be a little temperamental, but it’s often close enough to make things interesting.
________

hearing back from parents in the comments section about how the games went after the fact also makes it interesting. So, the more feedback and commentary the better.

also, and maybe this will be interesting and maybe not. we – there's three of us- are working on a website/service that will provide some of the value that youthsoccerankings.us used to, guidance for college recruiting and some other things.

please go check us out at www.analytics.soccer. We’d appreciate your comments and feedback. It’s a work in progress, so a little messy, but we have some big ambitions (as you’ll see) and the more feedback we get, the better.
________

Our Bring the Popcorn Match
(i.e., so competitive that you should bring the popcorn)


Our Play the Kids! Match
(i.e., match is not expected to competitive, thus expected winner should play its younger players up, no disrespect to other team. just is what it is…)

Good luck this weekend! (it’s nice to be back…)
D

Definitely excited to seeing you doing this again. I remember reading your posts for the 05 age group back in the day when the DA was in full swing. Was always impressed with how accurate the predictions were even when I thought they would be way off.

It will be interesting how the algorithm works for this age group as from my experience it is a crap shoot who will show up on any given weekend for each team. With school events, college visits, injuries, and normal life I know the team my son plays for we never know who will or won’t be available for any given game.

The Algo had a rough weekend, probably shaking off some rust from being out for so long. Like MJ when he went go play baseball for a bit...

Would love folks' feedback and commentary on the matches, and why the results may have differed from what was predicted. FYI, here's the cirteria we use for evaluating success:

here's predict vs actuals. predicts are in black, actuals are in blue. all observations, unless otherwise stated, are from looking at the scores (i.e. we weren't there). Predicts for this weekend will be out tomorrow. Meanwhile, while you're waiting, go check out www.analytics.soccer

Our Bring the Popcorn Match
(i.e., so competitive that you should bring the popcorn)

So, not so bad for the Algo to start things. Anyone who was there have any thoughts/comments?

Our Play the Kids! Match
(i.e., match is not expected to competitive, thus expected winner should play its younger players up, no disrespect to other team. just is what it is…)

Yup, SD Surf is like the honey badger, they just don't care....

And then there's this result.. SDCS Surf making the algo look bad... yeah, they won, and yeah the Algo said they'd win. But, guys winning 6-1 when the Algo called a 2-1 win? That's just rude

(but tbh, never have liked the 05 Legends since, back in the day, they had a bunch of guys who were clearly like, three years older than their stated age, but that's a whole other thing from years back with no place in this family-oriented forum)

SD Surf vs Heat FC => 3-2 SD Surf winner
Genuine question to the peanut gallery. Anybody catch this game? Were the Heat missing any offensive players or mids?

So Saturday outcomes for the Algo?

Not incredibly awful, but not our standard. The Algo feels good about the results. but really, it feels more like the first time we asked the Algo for help betting on EPL games...

We mean, congrats! LA Breakers for a nice, unexpected win, you guys should feel really good about your progress

seriously? we mean, congrats! LA Breakers Beach FC for a nice, unexpected win, you guys should feel really good about your progress

Evidently, the Heat got stuck in the same traffic that got the got, scrolls up... the Heat goal scorers on Saturday, so yeah guess a couple of players were missing.. Del Mar wins 2-0
______

So Sunday outcomes for the Algo?

Again, not incredibly awful, but not our standard. The Algo is also a little more humble...
______
So net net, work to do. More games will help the accuracy though. Predicts will be out tomorrow.

In the meantime, go check out www.analytics.soccer go kick the tires a little, it's what we would call pre-alpha, but should give a flavor of where we'd like to go. let us know what you think and what you want to see... Thx!

here's predict for this weekend. hopefully, the algo does a bit better than last week.

lots of fairly tight games so no popcorn or play the kids games. good luck this weekend! (and yes, good luck even to the Legends!)

Something that I think is hard for the algo to predict in this age group is the roster for any given week. Not sure if other teams have the same issue, but the PSAT, SAT, homecoming, and college visits have had a significant impact on the week-to-week results for our team.
J

Science and the World Cup: how big data is transforming football

One clear lesson that has emerged from data analysis is that players shouldn’t shoot when they’re far from the goal. “If you look at any league in the world, the distance from where players have taken shots was much higher ten years ago,” Ramineni says. “That all happened because data-analytics people have started saying: ‘Why are you shooting from there? It’s only a 2% chance!’ ” 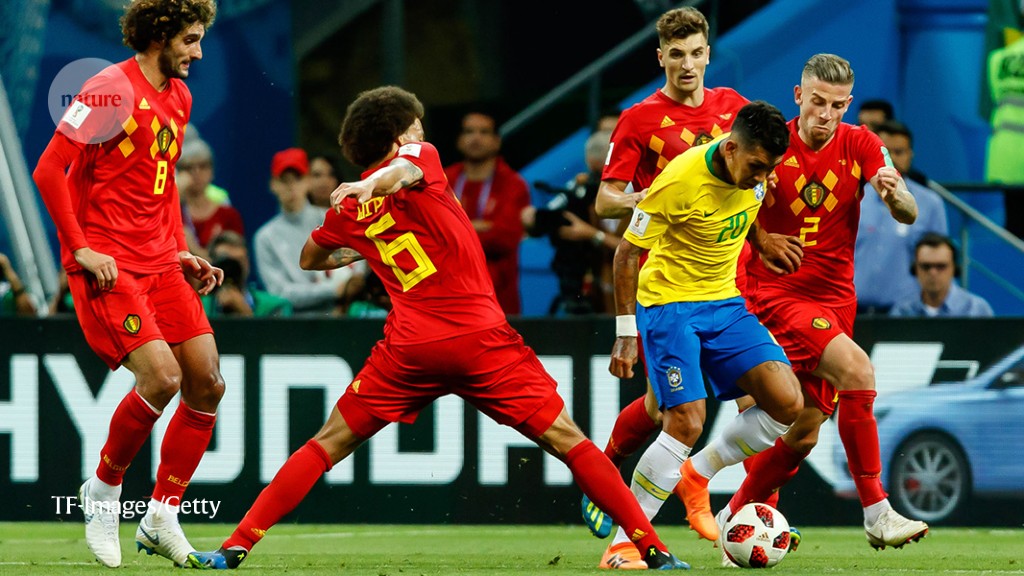 Science and the World Cup: how big data is transforming football

As the FIFA tournament kicks off, researchers are showing their skills to help soccer coaches develop players and tactics.